I had an action that was working really well, but I think a recent PS update has wrecked it. The action "Make Color Selections" (which just plays several actions run in sequence) does a color range search. If it finds that color and creates a selection, there is a "Document Contains Selection" conditional statement that allows the action to proceed, eventually moving on to the text action in the sequence. If that color isn't present and there is no selection, it moves on to the next specified action to search for the next color range.

Everything works great if all of the colors are present (Red, Green, Magenta, Yellow, Cyan, Blue), but if one of those colors is not present, the action will go to the next action, finish it, but then jump back up to the previous action and continue at the step just after the Conditional statement.

I've attached some screenshots, the .ATN file, and the PSD file I've been practicing with. 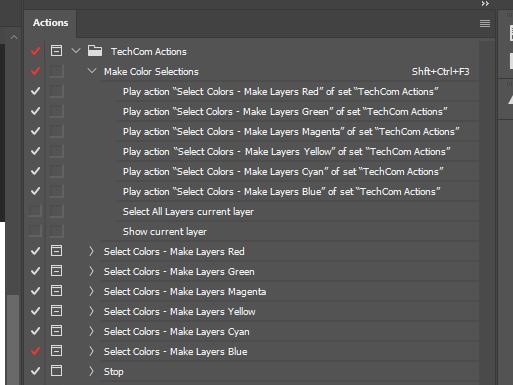 Thanks for any help you can offer. I've tried turning this into a JS script, but was way in over my head.