Alt/Option + layer eye clicking functionality inside a layer group only

Alt/Option + layer eye clicking functionality inside a layer group only

When we Alt/Option click the eye on a layer, we see this layer only.

The simplest alternative I'm envisioning is a hotkey to a script that cycles through the first level of layers inside a layer group and makes visible *only* the next layer each time.

For example, I would want to cycle through these 4 variations (inside the group only showing that layer) with a hotkey... 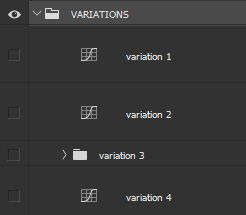 Some may want forward and backward, and/or starting from an already selected layer, but if it comes down to me I have to start even simpler, like starting on the first layer and somehow selecting the next layer on each script activation...

My first questions are if this has already been solved before? Or if anyone feels it so useful they might wanna whip it up?

Otherwise I will someday dig into it and I would welcome key script bits, or clever ways you would go about it

Pseudo code for my ideal script (that would start by showing a possibly already selected layer only, then the next, etc., and also cycle) ...


This pseudo code is still lacking the clever bits to go to the next layer on each script activation, and to keep cycling...

TIA for any pointers